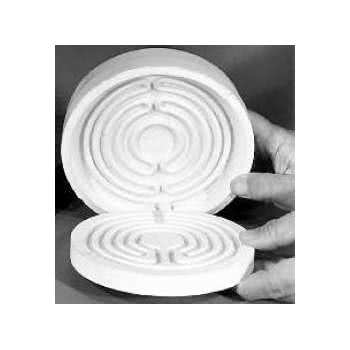 Silica is a chemical compound, silicon dioxide, and a mineral of formula SiO2, current and very hard. It represents more than 60% of the mass of the earth's crust. Silica SiO2 is chemically stable and hardly attacked by hydrofluoric acid, a reaction used in glass etching.

Each of the crystallized forms has several varieties. The transition from one species to another results in dimensional variations, some of which are important at the scale of ceramic materials. This often results in thermal shock fragility and other phenomena due to expansion tension.

The stability of the species will depend on the temperature range to which they are subjected, the fineness of the grains, the cooking atmosphere and the presence of other oxides acting as catalysts (mainly the alkalis: K2O, Na2O, Li2O and also alkaline-earths with CaO) also called "mineralisers".

We can provide our skills for any technical advice or projects when it comes to specific shapes: machining, manufacturing, analysis, thermal analysis, and more.

Do not hesitate to get in touch with our engineers.

Cotronics' Rescor 310 M is made from porous silica. It can withstand temperatures of up to 1,650°C continuously and guarantees low thermal conductivity and limited expansion. It is available in three sizes and can be easily machined to the desired shape.
Full description